ava
Zefir is somewhat similar in its consistency to marshmallows. ”Zephyr" is a unique, Russian dessert; a heavenly, marshmallow-like meringue. Follow this step-by-step video and you'll be amazed at just how easy it is to make! Zephyr is a very common sweet produced in Post-Soviet countries. It can also be made in advance, so you don’t need to fuss around the kitchen with the dessert last minute. They are not like the bagged marshmallows you would buy at the store. These are much lighter and they practically melt in your mouth as you eat them.
Zefir (Зефи́р, may also be spelled zephyr or zephir) is a type of soft confectionery made by whipping berry purée with sugar and egg whites with subsequent addition of a gelling agent like pectin, carrageenan, agar, or gelatine. It is commonly produced and sold in the countries of the former Soviet Union. The name given after the Greek god of the light west wind Zephyr symbolizes its delicate airy consistency.
2 New recipes every week! Subscribe for free ( Get notified when I release a new video )
Socialize with me through other media:
Facebook:
Instagram:
Pininterest:
Twitter:
Google + :
Snapchat Code : allasyummyfood
Ingredients
200 gr of frozen raspberries
100 gr of sugar
1 egg white
5 gr agar agar
75 gr of water
200 gr of sugar
Icing sugar for coating
Directions:
Step 1 : First we are going to make the raspberry puree. If you dont have frozen raspberries, add a little bit of water when you are cooking them. If you are using frozen, no need to add water. Add your raspberries into a pan, then add sugar and cook on low heat for 5-10 min until its melted.
Step 2 : Place in a blender and blitz until smooth and sit through the puree so you have no seeds.
Step 3 : To make the syrup, add water and agar agar into a pan, then add sugar and mix through. We will be cooking this mixture for 5-7 min on high/ medium speed until it starts to fall of the wooden spoon and look a bit sloppy.
Step 4 : At the same time, you want to add your cooled raspberry puree into a stand mixer with egg white and start whisking on highest speed for 5 min until mixture is fluffy and has peaks.
Step 5 : Slowly add syrup into your meringue mixture and whisk on low speed at first and then high speed again until its fully incorporated and has stiff peaks.
Step 6 : Place your marshmallow mixture into a piping bag with star nozzle and pipe round shapes. This recipe will make from 10-15 zephyrs. Leave in the kitchen to set overnight.
Step 7 : The next day, peel off each half gently and combine with the other half. Dip zephyr into icing sugar and coat around and place in a box. You can eat it straight away or leave them for one more day to dry out, they will be nice and crispy chewy outside and very soft and marshmallowy inside. Enjoy!
Translation for Russian speaking people: Русский перевод ниже.
Ингредиенты
200 г замороженной малины
100 гр сахара
1 яичный белок
5 г агар-агар
75 г воды
200 гр сахара
Сахарная пудра для покрытия 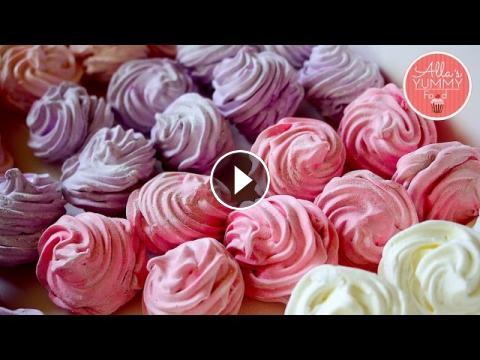 Zefir is somewhat similar in its consistency to marshmallows. ”Zephyr" is a unique, Russian dessert; a heavenly, marshmallow-like meringue. Follo...